Rock climbing in the ACT began in the very early 1960s when Tony Wood established the region’s first routes at Mt Coree. The climbs were originally graded in Tony’s guide using the British HVS system, as John Ewbank’s Australian grading system hadn’t been invented yet!  Mt Coree was the place to climb in the ACT before Booroomba Rocks were discovered.  Another popular area during this time was White Rocks just over the ACT border in Queanbeyan, NSW.

Booroomba Rocks was first visited in 1962 by members of the Canberra Touring and Walking Club who bush-bashed their way up the valley from Booroomba Station near Tharwa.  The first recorded climb at Booroomba Rocks didn’t occur until 1966 when Peter Aitchison soloed Aitchison’s Needle after a long bush-bash up the Valley.  Tony Wood was also establishing the first recorded climbs at Blue Lake at around this time.

During the late 1960s – and to the good fortune of Canberra’s climbers – NASA and Australia’s Deep Space Program built Honeysuckle Creek Tracking Station just a few kilometers south of Booroomba Rocks.  As part of this program, numerous access roads were constructed in the area.  This allowed climbers to drive to within a kilometer or two of the crags instead of negotiating the long bush-bash up the valley from Booroomba Station.  It was during this period that many of Booroomba’s classic climbs – such as Sunstroke, Outer Limit, Hermes, Possum and Integral Crack – were established.  Although graded at a mere 19, Integral Crack (established by Peter Aitchison and Peter Cocker) rivalled Janicepts in the Blue Mountains as the hardest climb in Australia at the time.  Integral is also one of the best single pitches of granite climbing to be found anywhere.

Not long after this, in the early 1970s, John Armstrong noticed lots of granite tors whilst studying aerial photos of Orroral Ridge.  What was even better was that the Deep Space Program had built a road right up to the tors on the ridge.  Hence, many of the cracks on Orroral Ridge were soon climbed.  It should also be noted that around 1975, Canberra climbers under the guise of the ANU Mountaineering Club mounted Australia’s first successful climb of a Himalayan Peak.  The expedition, led by Peter Cocker, placed Lincoln Hall and Tim McCartney-Snape on top of Mt Dunagiri – a 7000M peak in the Indian Himalaya.

By the mid 1970s Booroomba Rocks, Orroral Ridge and Gibraltar Peak had become established areas that attracted many of Australia’s leading climbers at the time such as Bryden Allen, Joe Friend, John Fantini and Keith Bell.  There were still quite a few plum climbs that were ripe for the picking, notably Further Out at Booroomba and Sooliamon at Orroral Ridge.  By the late 1970s many more run-out, bold and classic climbs such as Steele Breeze, Crimble Cromble and Rubbishman were established by Rick Magregor and Pete Morris.  Climbers from Canberra and Sydney also ventured into the depths of Bungonia Gorge during this period.  Most climbers found Bungonia to be considerably challenging and simply left the area with shattered egos.  However, at least two routes were established: the Morgan Mortimer route on the North Wall and Old and Grey on the South Wall. 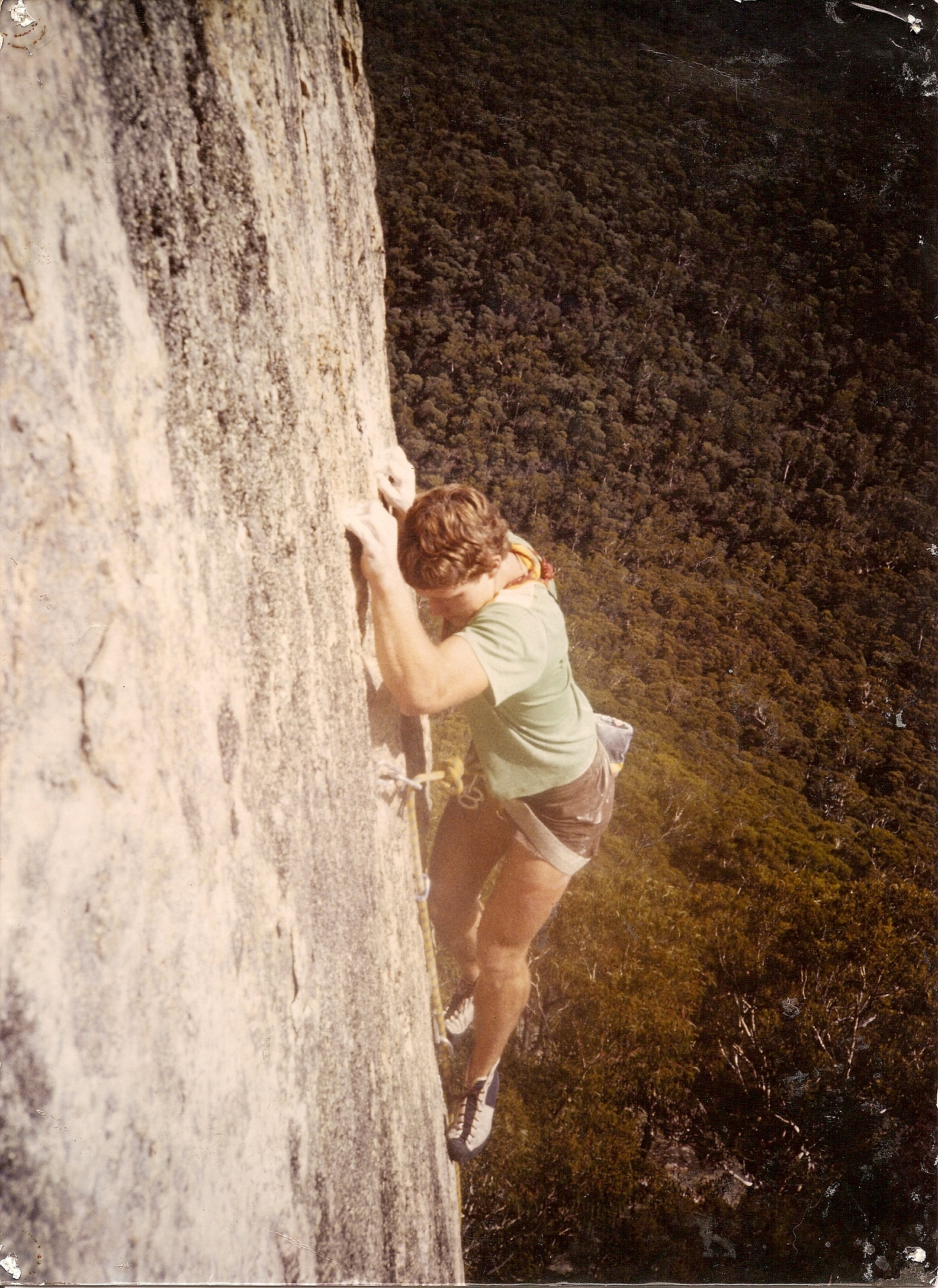 In the 1980s, most of the natural lines had been climbed.  However there were still plenty of face and slab climbing challenges to be had and a few new areas to be found. Silhouette Slab at Mt Scabby was probably the most notable new area to be found.  Many of the climbs during this period had hand-drilled bolts that were placed only when absolutely necessary.  Notable climbs of this period, such as Moral Terpitude, Extreme Youth, Space Wasted, Only The Good Die Young and Atstrodyne, are certainly not over-protected.  The main protagonists of this period were John Smart, Mike Law-Smith, Richard Watts and Paul Daniel.  Some even more bold (or suicidal!?) routes such as Rock Lobster, Immaculate Deception and Powder Finger Finish were led on-sight, without bolts (except for one hand drilled bolt on PFF placed on lead) by Roark Muhlen.  Tony Barten and Mike Peck were also extremely active during the mid to late 1980s.  Together, they established quite a number of the ACT’s best routes including Snickers, Designers Drugs and Smash Palace at Booroomba Rocks, Traceyanne and Crystal Voyager at the Belfry, Antipodean Atrocities at Gibraltar Peak and host of other great climbs.  There was also a resurgence at Bungonia Gorge led by John Fantini in the mid to late 1980s.  Over 40 adventurous, multi-pitch, trad climbs were established in the Gorge during this time.